"I battled the same disorder as Sam."

Read the text of this article

"I battled the same disorder as Sam"


With two beautiful children, a loving partner and a successful career in reality television, it seems like Sam Faiers has it all. But the 27-year-old former TOWIE star admits she doesn't always have things under control.

As a child, Sam was diagnosed with trichotillomania, a disorder linked to obsessive compulsive disorder that’s characterised by an uncontrollable urge to pull out hair. Sam says it started when her stepdad was sent to prison.

'I was picking out an eyelash making a wish for him to come home,' says Sam. 'It's gone so far that it's compulsive and it's so hard to stop.'

Like Sam, Holly Millington, 31, struggled with her own urges to pull out her hair…

"As a hairdresser, every day I'd meet women who were unhappy with their hair. And I'd be there to help them. Colour, length, treatments – I know all there is to know about keeping hair in good condition.

But as I pinned my own curls over my bald patches, I wondered, would any of them trust me with their hair if they could see the state of my own?

I started pulling my hair out when I was 15 after my nan passed away. We'd been so close, and her death hit me hard. Desperately sad, I couldn't concentrate at school and I began twiddling my hair in lessons. Before long, twiddling turned to plucking.

It was just one or two strands at first, the tiny twinge made me feel better somehow. But one day, I got home from school, switched on the TV and settled on the sofa. Without thinking, I started playing with my hair.

An hour later, I looked down at my lap. It was covered in strands of my long, curly, blonde locks.

I quickly brushed them on to the floor as my mum walked in. I didn’t want to talk about it.

Weeks passed and I kept pulling at my hair. I'd wear hats or pin hair over the patches I'd made.

Then one day, in summer 2003, a girl came up to me at school. 'Hey, baldy,' she said, pushing past. I realised the grips I'd used to pin up my hair had fallen out. I was mortified.

As soon as I got home, I started to cry. 'Mum, I've been pulling my hair out,' I sobbed.

Within minutes, she'd booked me an appointment with our GP. He insisted that it was just a bad habit and I'd grow out of it.

Reassured, I tried to get on with life. I started training to be a hairdresser. And, although I was still pulling my hair out, I pushed any worries aside.

In August 2007, I met Gareth. Soon, we were a serious couple and I felt comfortable enough with him to show him the bald patches.

After graduating, without the stress of exams and happy with Gareth, I was pulling my hair less. But I hadn't stopped completely. And if ever I was worried, or tired, the pulling became more frequent.

I tried everything. I had hair extensions attached, but I just pulled those out too. I even wore false nails, hoping it would be harder to grip individual hairs, but nothing worked.

Still thinking it was just a bad habit, I didn’t go back to the GP. I was convinced nobody except me would ever make me stop.

But people were starting to notice how patchy my hair was again. It was so embarrassing. Hitting the gym or going swimming was out of the question. As soon as my hair got wet, it was obvious how thin it was.

By the time I was 29, my hair was so sparse, I couldn't even attach extensions to it any more.

It was a few days after my birthday when I watched a TV interview with a woman who had trichotillomania. She pulled her hair, just like me. 'The condition feels like an addiction,' she told the presenter. That was exactly how I felt, too.

Googling, I realised my hair pulling hadn't been a bad habit at all. It was a recognised disorder.

After a bit of searching, I found The Lucinda Ellery Hair Loss Consultancy and nervously booked myself an appointment.

'Your hair can still be saved,' a consultant told me two weeks later, as she examined my head.

She explained I'd need a net applied to my scalp. The remaining strands of my hair would be pulled through it, then more netting with pre-attached hair would be weaved in and placed over the top. It would be like a permanent wig that let my own hair grow underneath.

'Perfect!' I grinned, as the consultant set to work on the new blonde style I'd chosen.

Over the next few months, my confidence soared. I started going to the gym. I could even go swimming. Every six weeks, I went back to have my 'wig' tightened, as my hair started to grow underneath.

Twelve months later, in August 2017, the netting was ready to come off. I was worried – what if I relapsed? But I vowed to do my best not to.

Family and friends couldn't believe how much my hair had grown. It was short and straight, but it was more hair than I'd had in years. 'I'm so proud of you,' Mum said.

I've been without the wig for nine months now, and so far, so good. If I ever feel myself going to pull my hair, I just get up and keep my hands busy – do the washing up, cleaning, anything.

I just wish I'd known about trichotillomania earlier. I'm so happy that Sam Faiers has spoken out about her own struggle. Hopefully it will raise awareness and show other women there's so much support and advice out there.

I'm so grateful that I got help before it was too late.

Article pages from the magazine 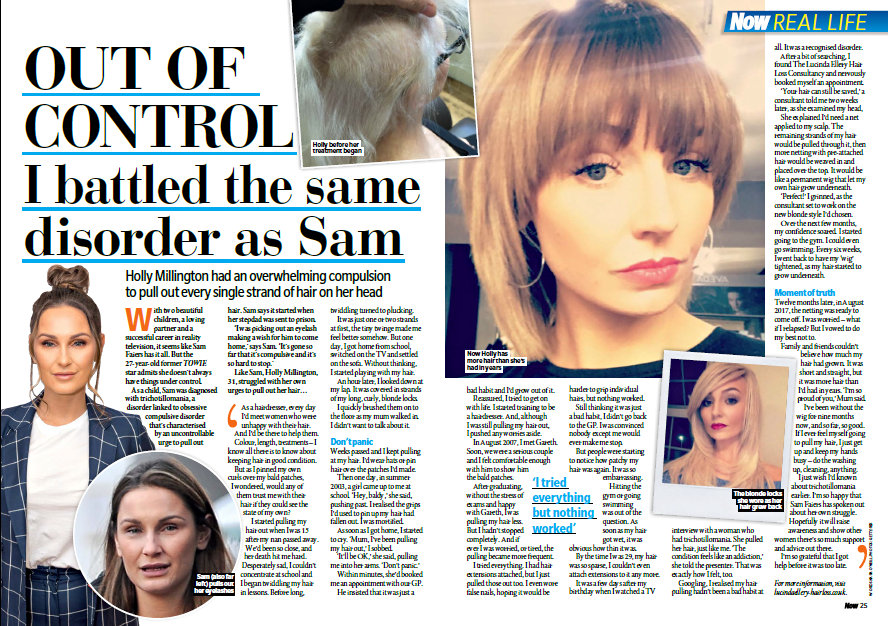 Back to the Press Articles page